July 25, 2019
Hajj 2019 vaccination requirements are established by the Ministry of Health of the Kingdom of Saudi Arabia 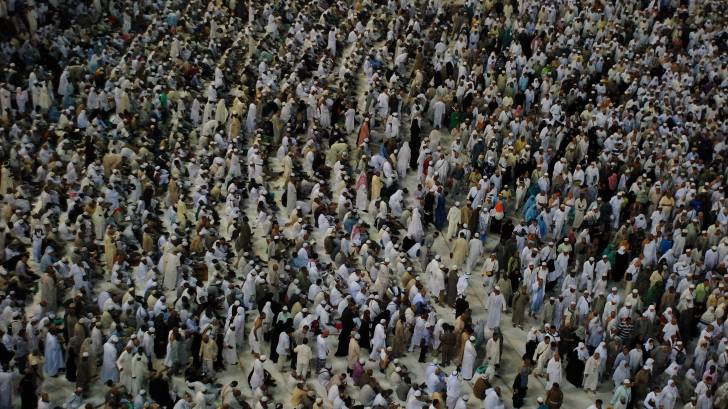 The worldwide resurgence of measles over the past 2 years has increased the health risk to any under-immunized person attending a large gathering, such as the Hajj 2019.

The Hajj is an annual religious pilgrimage to Mecca undertaken each year by 2-3 million people. This year's Hajj occurs from approximately August 9, 2019, to August 14, 2019.

A new study published online in the Lancet on July 25, 2019, says ‘there is a concern that the measles virus could be introduced into the Kingdom of Saudi Arabia from international Hajj pilgrims.

Fortunately, the measles vaccine coverage is very high (96%) in the Kingdom of Saudi Arabia.

These researchers say ‘at least 100,000 (5%) of the approximately 2 million Hajj pilgrims might be susceptible to the measles virus because of under-vaccinations.’

The good news is these researchers say the ‘majority of Hajj pilgrims were born before 1957, and therefore, are considered measles-immune.’

‘However, a significant number of Hajj pilgrims were born after 1957 and if they lack appropriate vaccinations, could be susceptible to the measles virus.

Since the measles virus can live in the air and on surfaces for 2 hours, 90 percent of unvaccinated individuals who come in contact with an infected person will also become infected, says the US Centers for Disease Control and Prevention (CDC).

Unvaccinated travelers infected with measles overseas have brought the disease back to the United States, causing outbreaks among unvaccinated people in their local communities. In response to the worldwide measles outbreak, the CDC issued a Level 1 Travel Alert on June 10, 2019.

Using travel volume data, measles vaccine coverage, the actual measles incidence in 2018, and an expected number of pilgrims arriving from 20 countries, these researchers estimate that 110 measles importations into Saudia Arabia will occur during the Hajj 2019.

Given the high-reproduction number of 20 new measles cases in susceptible populations, these 110 imported measles cases could trigger a major outbreak towards the end of the Hajj 2019 pilgrimage.

Furthermore, this could result in the rapid dissemination of measles when pilgrims return to their home countries, said these researchers.

Unfortunately, this model’s forecast may be conservative given the measles incidence rate has significantly increased during 2019, as compared with 2018.

This new study said the ‘6 leading countries with the highest number of likely measles importations into Saudi Arabia are forecasted to be coming from Yemen, India, Nigeria, Indonesia, Pakistan, and Sudan.’

In Europe, Ukraine has reported over 55,000 measles cases during 2019, And in the USA, from January to July 18, 2019, 1,148 individual cases of measles have been confirmed in 30 states. The state of New York has reported about 75 percent of all measles cases in the USA.

This study’s modeling suggests that measures should be taken to minimize the risk of measles introduction into Saudi Arabia during the Hajj.

These suggested tactics are as follows:

The measles disease can be severe and lead to serious complications - pneumonia, ear infection, brain inflammation, as well as disability and death, says the CDC.

Moreover, there is no specific treatment for measles.

If you are planning a trip outside of the USA this summer, it is now easy to check whether you need another measles vaccination.

The CDC published a digital app that enables international travelers to quickly self-qualify whether or not they need a measles vaccination.

The best way to protect yourself and your loved ones from the measles virus is by getting vaccinated, says the CDC.

You should plan to be fully vaccinated at least 2 weeks before you depart. If your trip is less than 2 weeks away and you’re not protected against measles, you should still get a dose of the measles-mumps-rubella (MMR) vaccine. And, the Proquad vaccine also provides measles immunity for certain children.

Regarding additional health risks to Saudi Arabia visitors, the CDC suggests that visitors ensure they are current with certain vaccines, such as Routine Vaccines.

Due to continuing reports of MERS-CoV disease in Saudi Arabia, people returning from the hajj should be made aware of the need to seek immediate medical advice if they have a fever (38 ºC and over), cough or difficulties breathing within 14 days of their return.

To schedule a pre-trip vaccine and medication counseling session with a local pharmacy, please visit Vax-Before-Travel.

Note: from the Kingdom of Saudi Arabia: In the case of a health emergency that outbreaks an international concern of a disease, to international health regulations in any country which comes from a pilgrim, the health authorities of the Kingdom of Saudi Arabia might have additional precautions against those pilgrims coming from that certain country, in coordination with the World Health Organization in a timely manner, in order to prevent the spread of the infection among the pilgrims of HAJJ and UMRAH, or to transport the infection to their countries.