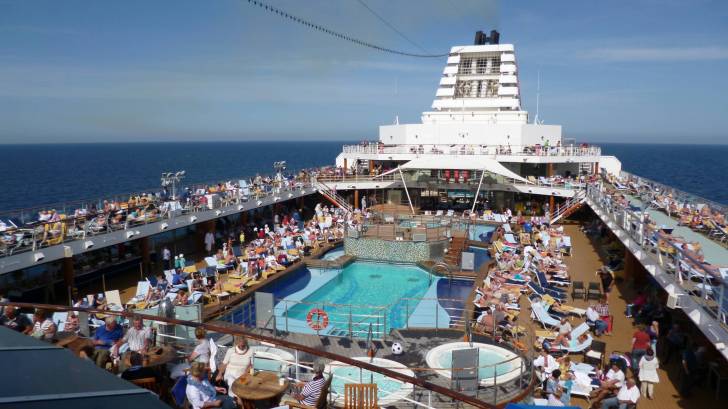 Nobody plans to spend their holiday aboard a summer cruise ship in their cabin’s bathroom confronted with a nasty case of Acute Gastroenteritis (AGE).

About 20 percent of Acute Gastroenteritis, which causes diarrhea and vomiting, is caused by Norovirus (NoV), according to the Centers for Disease Control and Prevention (CDC).

Noroviruses are highly transmissible, can spread easily, especially in environments where persons live in close quarters, such as a cruise ship.

Norovirus outbreaks on cruise ships tend to get a lot of publicity, such as on June 23, 2018, when the Holland America Cruise Ship Zaandam reported 73 sick crew and passengers.

The Zaandam cruise ship outbreak was the 6th reported gastroenteritis outbreak during 2018, according to the CDC.

However, the rate of acute gastroenteritis was significantly higher in 2012, likely related to the emergence of a novel strain of norovirus, GII.4 Sydney, reported a separate CDC study.

The proportion of outbreaks attributed to GII.4 Sydney increased from 8 percent in September 2012 to 82 percent in March 2013.

GII.4 Sydney became the predominant norovirus outbreak strain during the 2012-13 season, but its emergence did not cause outbreak activity to substantially increase from that of previous seasons.

During 2008–2014, a total of 133 cruise ship acute gastroenteritis outbreaks were reported. Among these, 97 percent were caused by norovirus, and 73.8% percent were GII.4 strains.

This CDC study concludes saying GII.4 Sydney has emerged as the predominant norovirus outbreak strain in the United States.

However, the study data did not indicate that GII.4 Sydney caused a substantial increase in norovirus cases.

According to the CDC, proper hand hygiene is vital to preventing norovirus outbreaks on cruise ships.

This is best accomplished by washing hands with soap and water because it allows for the mechanical removal of the virus from the hands.

Alcohol-based hand sanitizer used alone has shown limited efficacy, but can be used in conjunction with handwashing with soap and water.

The development of preventive vaccines for norovirus is currently underway, reported a 2017 study.

However, there is not a norovirus vaccine available today.

Norovirus vaccine candidates rely on inoculation of virus-like particles (VLPs) formed by the main capsid protein VP1, subviral particles made from the protruding domain of VP1 (P-particles) or viral vectors with a NoV capsid gene insert produced by bioengineering technologies.

A VLP vaccine candidate has reached phase II clinical trials and several others are in pre-clinical stages of development.